My wife Caroline and I wanted to do something special to celebrate our 15th wedding anniversary and a mini-break at Chalet Abode in the French Alpine village of Villarabout was exactly what the doctor ordered.

The picturesque village of St Martin

Just getting three days alone together, given that we usually have our hands full with four young children, was a treat in itself. But this was like being catapulted into a different universe. From the moment we arrived at Geneva airport, where a purring Mercedes was there to meet us, until we were dropped back at the airport three days later, we were cocooned in luxury. Usually, it’s us doing the looking after, so to be pampered was almost comically pleasant. Throughout our stay, Caroline and I kept looking at each other and laughing at the sheer giddy pleasure of it all.

Villarabout is a few minutes’ drive from St Martin de Belleville, which has to rank as one of the most charming resorts in the Alps. A former commune in the Savoie,

it boasts a three-Michelin-star restaurant in the form of La Bouitte — a honeypot for Russian plutocrats, who chopper in every night at peak season — and was the setting for 120 Days of Sodom by the Marquis de Sade. What makes it particularly attractive, however, is that is it is part of Les Trois Vallées, the 600km ski area that stretches from Courchevel to Val Thorens.

Cosy up at Abode

Chalet Abode is a 100-year-old Savoyard farmhouse, one of three chalets in Villarabout that have been restored or built by the husband-and-wife team of Helen and Chris Raemers. The other two are Chamois Lodge and The Ecurie, 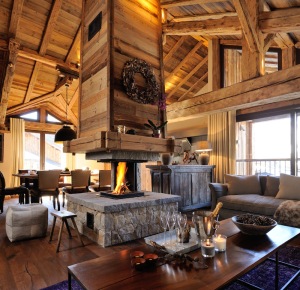 which was nominated for ‘Best New Ski Chalet’ in the 2016 World Ski Awards. All three have been done to a very high standard and, as part of the high-end package, you get your own chauffeur-driven car and a personal chef. In fact, we had two chefs — Sam Greensmith and Amandine Ropp — and their creations were the best thing about our holiday. When we arrived at around midnight on the first day there was a selection of home-made pastries waiting for us and the following morning we had a lovely continental breakfast, including home-made muesli, home-made yoghurt and home-made Nutella! But the highlight of each day was the six-course evening meal, which included six wine pairings. I used to be a restaurant critic and in my judgment Sam and Amandine’s food merited a five-star review.

That was a view shared by Marcus Wareing, who’d been a guest at Chalet Abode three weeks before us.

Les Trois Vallées didn’t disappoint. Caroline worked as a chalet girl in Courchevel in her gap year so she knows the area quite well, but I’d never been before and was determined to get round all three valleys on the first day. To that end, we hired a local guide called André Buet who has been criss-crossing the region since 1972. Not only did he know the area like the back of his hand, he also knew the best places to eat. Thanks to him, we stopped off for lunch at Chez Pépé Nicolas, and enjoyed a meal almost as good as one of Sam and Amandine’s.

One of the loveliest things about the whole experience was that when we returned to St Martin de Belleville in the late afternoon, completely spent after skiing more than 50 miles, our chariot awaited us. No fiddling about with boots and skis, either — the driver took care of all that. All in all, this was probably the best mini-break I’ve ever had. It was the kind of gold-plated skiing experience I imagine Prince Charles has when he goes to Klosters. We never made it to La Bouitte, but I suspect we ate even better at the chalet. Highly recommended, unless you want to lose weight.